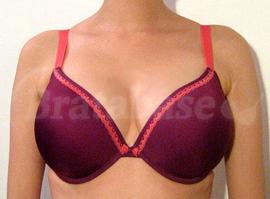 AW2010-SS2013. Moulded plunge with a partial band, available in various colorways More...
This bra is discontinued.