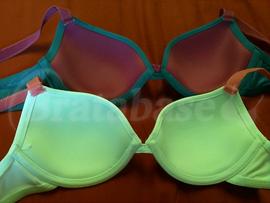 I originally bought this bra to fill my much needed t-shirt bra gap. It has very thin molded cups, just enough to provide some modesty and a smooth shape, and nowhere near enough to increase your apparent size. That this bra happens to be a plunge was only incidental - I appreciate being able to wear it under lower shirts, but it's not the plunge I would select for dressing up. And it performs its intended function admirably! I can definitely wear this bra under anything without the cottage cheese look cropping up.
Now, let me enumerate the faults of this bra, just so we're clear. The center gore is extremely thin, so I know I'll have issues with it wearing out. It already gets twisted so easily. The Hawaiian blue color is very pale, and I've already picked up one mysterious discoloration on the band - there's no telling how many more of those I'll find. The cups are very shallow - which I need! - but are also fast-closing. This is a bra where, for the first hour or so after I scoop, I'm definitely quadding. It settles down throughout the day, so I'm not sure I want to buy a 28DD, but I'd assuredly try one on if I got the chance. Oh, and on the Hawaiian blue/pink colorway in particular, I've found the band to be slightly loose.
It's not all bad, though. The straps are fully adjustable! And this bra is a regular in the Cleo lineup, plus they release fun new fashion colors each season. I'd say it's like the wide-breast friendly Deco, because it's our versatile plunge-smoothing-molded combo bra. Similarly to the Deco, it's off by about a cup size, but in this case, size up. And as a bonus, the band is tighter!
I'd really strongly recommend this bra if you've previously tried and disagreed with the Deco, because it's a very clear counterpoint to that fit - instead of narrow and deep, this bra is wide and shallow. I would call this *the* t-shirt bra for wide breasts to try. But, if you're on the large side of your regular size, do size up!