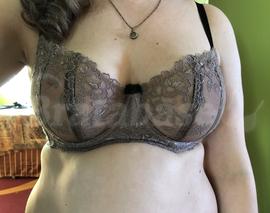 This is the last of the four bras that Wilderness1 sent me to try after I tried the 65J Belen and thought it might fit better with alterations. That said, this is the only bra of the 4 that actually has no alterations. The Bridget that she initially had was a 65J with alterations and was still a bit big/tall and less than a perfect fit, so she traded her modified Bridget for this unmodified one.

As Mary Poppins’ measuring tape said about her, this bra is “practically perfect in every way” although it is not completely perfect. For example, the straps are a bit wider than I prefer, and “maybe I can do like 1cm shorter cups. But it’s a really good fit, considering it is as is. This one was not for sale and I had to send it back. Of the people who I shared the pictures and video of initially, everyone commented that it was a great fit.

The beigey lilac or taupe lace is very sheer, with the vertical cuts and straps in black. It’s an interesting contrast. I’m not sure if I prefer it this way or would prefer it more monochromatic. The lace is not incredibly soft or anything but it’s definitely not irritating to me. It’s a very lightweight bra. This was initially a longline, so I guess you could say it is modified, but just not in the way you think of when you think about alterations.

My tissue is soft and center full, and while I’m actually even fullness, my tallish roots are shallow and I functionally fit as short rooted and full on bottom. This bra is just the right height for my big boob but a little bit tall for my small one, which is why I say maybe I could reduce the cups a tiny bit. But it’s a little bit too risky when the big side does fit pretty well.

I’m a little bit surprised at the band because I thought it would fit tighter than it did, even though I have heard it’s a stretchy band. I think I was ok with the middle hooks on this one, though it might’ve been a lot tighter when it was new.

There’s still the original 65J with alterations in the listings that I have considered, though now I see that it might not fit that well. This bra actually has me looking at other soft cup longlines on the site like Tara and Black Swan. I’m seriously considering going with one of them as a 3HC. Could it be my new black workhorse bra?

Straps are slightly too wide