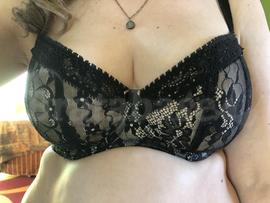 This bra's measurements have been altered
Altered straps, *Made in a 3HC cut *Reduced cup height *Straps moved in 2cm *2cm deeper cups especially at the bottom of the cups, near the wires *Reduce center gore by 1cm

I recently got a 65J Belen 3HC which is beautiful, but not a perfect fit. While the bra band was a bit snug, the cups did fit, but were a little bit too tall for my functionally short roots. So Wilderness1 was super kind and generous to offered to send me a bunch of her altered Comexims to try. Looking at the list, some looked like they were going to be too small, and some looked like they had similar enough measurements and alterations, so I narrowed it down to 4 bras (one of which is actually Anna Pardal, which was made by Comexim). I had the option to purchase two of them, and this is one of them, though spoilers: I didn’t.

This bra came to me from her, but it was from another user, so I can’t fully gage how much it has stretched out. I was able to comfortably clasp it on either of the two middle sets of hooks (has 4 columns). The black lace on top of the champagne layer is striking, in the same way it was on my Victoria (which was navy lace). It’s got a bit of black lace to edge the cups instead of the eyelash lace that Victoria has.

Sadly, it’s still not a great fit. Straps moved in are ace, but the cups are still a bit tall and guppy, especially at the straps where my tissue is not prominent. Even though it’s got 2cm reduced cups, it’s got 2cm added depth at the wire, which negates the reduced cups in my opinion. My boobs just settle lower in the cups and still run out of tissue by the time they reach the top of the cups. I think that this set of alterations, minus the added depth, would fit me better. I’m not convinced that the lower gore is a benefit either. Or perhaps a 70H with added depth at the wire. Not sure if that would work any better or differently.

Because it’s a little bit taller and open still, it is quite visible under my tops. I tried a few to see if I could get it to work with anything, but the cup edge was still a bit noticeable. Unless I wore a cami or tank over it under my tops.

Somewhat sad it didn’t work, but I am glad to have tried it. It makes me think that maybe my Ingrid really does have reduced cups, but simply irrelevant or redundant due to the added depth.