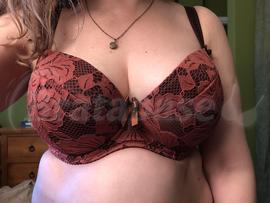 This bra's measurements have been altered
Altered straps, Straps moved in 2cm, gore reduced by 1cm, cups deeper at bottom by 2cm

Ok, so I keep putting off reviewing this bra. I had hoped to get feedback from Anna on this and the 70H - Comexim » Triss 3hc but it hasn’t happened because of the changes last month. Nevertheless, should I get the feedback, I’ll update this post.

I have wanted this bra for so so so long. I love the brown base and salmony coral lace overlay. I love that it had texture yet still relatively flat. The matching shorts are cute, and while I’m not really a fan of the boy short style as they do not generally flatter my figure, I still wanted them. I did consider asking if they could be made in a different style but decided to stick with the szorty.

I was finally in a position to get it at long last, and I had multiple email conversations with Anna about what size to try based on the fit of the 65HH - Comexim » Jade Plunge , 65J - Comexim » Ingrid Plunge Bra (289) , and 32FF - Anna Pardal For Comexim » Lady Grey Sophisticated Balcon

The volume of the Jade is/was fine, but the cups were too tall and the straps were too widely spaced. The Ingrid is pretty good, but it’s slightly too large, however the way it closes on top helps hide that, and it’s a little more coverage than I expect from a plunge as a result. I wanted to try it because of the alterations (straps moved in 2cm, 2cm depth at wire, reduced cups though it was questionable if that was really fine) as the Jade was unaltered. Nevertheless, it is still a fave. The Lady Grey is is also altered (equivalent to the Jade with 2cm straps moved in, 2cm lowered gored, and 2cm reduced cups) and a little bit small on my big boob. This one is also a fave. So with this in mind, including pictures and videos, Anna opted to make this as a 70H with straps moved in 2cm, gore reduced by 1cm, and 2cm more depth at the wire. I admit that I was a bit surprised at the combination, especially with the cups not reduced, but I figured I would try it and see.

With all this in mind, the fit is pretty good. It’s not 100% perfect, so it’s not my perfect size and alterations. It’s not going to stop me from wearing it though, and if I figure out what is my best size and alterations are, I might try to reorder it again. The band is pretty tight, so I definitely couldn’t have done a 65 in this one. The 70 is snug and fits well on my 28.5” but somewhat sensitive ribcage. The band is covered with the lace that covers the cups, so I am not surprised by a snug band. The straps feel like they’re a little bit wide, making me question the alteration, but I have compared with the straps on my Ingrid and they overlap exactly the same, so...? The cups seem like they are a little bit full coverage, like the Ingrid, which is not inherently a bad thing, just an observation, and the cup volume is maybe a bit more than I need, by like maybe a quarter of an inch. I’m still waiting to ovulate, but it might be better for high tide boobs, if I ever get there. I’m not sure if I need the added depth or not. Maybe I need 1cm? Maybe none? I’m not sure if reduced cups on added depth really leads to a shorter cup. I feel like they negate each other as more depth means my breasts settle in lower and even removing depth makes them still tall. I’m not sure if it’s a solid theory. Tightened the straps a little bit more and the gapping is not as bad. I’m not sure if I need a reduced gore. I don’t think it hurts, but I’m not sure if it’s a benefit to me. The cup width of this bra is fine. The wings seem a little bit tall, especially with the smaller 2x3 hook tape, but it’s not a problem, just a visual aesthetic.

I ordered a Queen of Hearts with the Valentine’s Day sale in a 65HH (because it shows band is stretchy in the measurements here) with straps moved in, overlapping gore and 2x4 hooks. So we’ll see what the fit is like in the cups with minimal alteration. I’m hoping that I can get away with only straps moved in as the fewer alterations, the better.

The szorty was really tight. You can see the difference in the width at the hips in my pictures. I did break the seams at the hip area on top and, combined with washing them, it fits better. The lace is still a bit rigid but it’s more wearable, especially with the leg hole moved to my crease to fit more like a hipster or cheeky, as the back side is not total coverage.

I do really love this set. It’s not a perfect set, but it’s comfortable and I wear it as much as I can.

So I added a few more recent pictures to the profile that show a more accurate representation for the current fit. I took them to add to an email to Joanna along with the Queen of Hearts and Lady Grey for suggestions on alterations. The response I got was, if it like the fit of the Hot Chocolate, stick with the same alterations. I did reply back saying that I felt it was maybe a little bit too large and too tall still, and would it be too much trouble to also reduce the cups or would reducing the cup depth from 2cm to 1cm reduce the volume and cup height slightly, so we’ll see if I get a response. Just curious about the feedback from here on the fit and where you think an alteration is needed. I might opt to post a fit request.

Cups are slightly too big; straps are borderline too wide

Cups are slightly too big; straps are borderline too wide