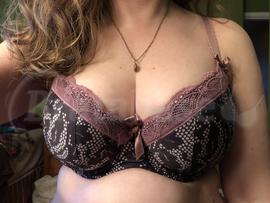 This bra's measurements have been altered
Altered straps, Straps moved in 2cm, gore reduced by 1cm

This is one of the two bras ordered around Black Friday. After the 65J - Comexim » Belen Half Cup was a little too tall and tight, I messaged Anna at Comexim to help me figure out what size I should try next for a better fit. We ended up working on both 3HC fit and plunge fit because I like both styles. Guys, it was really fricking hard to decide what style to try, but she suggested Triss, and it was on my short list, so I went with it. I seriously had a half dozen or more short listed styles to try the alterations with. I’m glad she picked it from my list as the black is good for my work uniform (also black).

This bra is a padded 3 part half cup with 2 vertical seams, and lace covering the cup edge. The material of the cups is quite soft and smooth, a bit silky, and the foam cups are lightweight. It’s black with what appears to be white or ivory dots in a sort of pearl necklace design, though in some lighting, look a little pale pink tinged. The lace is a lovely shade of mauve. The bow, straps, and trim are a similar mauve shade. The band has 3x3 hooks and the straps are fairly thick.

After sending pictures and videos to Anna of all the Comexims I’ve tried, and the various sizes and alterations combinations, she chose to make a 70H with the straps moved in 2cm and the gore reduced by 1cm. The plunge was the same, but added 2cm of depth at the wire. To be honest, I was a little bit curious that both bras were the same size, and that the plunge had the added depth when it is considered to fit larger than the half cup. I usually hear people size up in the half cups/down in the plunge. I was not so concerned with the cups not being reduced on this one because it’s a cup size smaller than the Belen was and I thought maybe I do need a cup size down.

The band is quite firm with limited stretch, and I’m glad that I got a 70 for this one. That said, I might have been able to do a 65 band if it had an extra column of hooks, though might be a bit snug at first still. The wires seem to be narrow enough, though I could possibly go a bit narrower. The cup height also seems to be ok, and the lace over the edge hides any minor fit issues. I’m unsure if the reduced gore is a benefit to me, and I don’t know if it’s a factor in the overall cup volume. This bra is a little but too small, and it’s most noticeable on my big side. It’s a little compressing, but is typical for this style and it’s not a huge issue for me. Sometimes I prefer this fit over the more projected and slightly pointier plunge.

I got the matching bottoms, however, by default, they’re a boy short which generally isn’t a good style for me (though I did stick with the shorty with the other bra). Since the Triss is similarly styled like the Scarlet, I asked for her to make the bottoms like the Scarlet for me...and I am glad I did. I ordered the medium and they fit. They’re a little snug, and I probably could have done a large, but they might ease in a bit more with wear. I would have gotten a bit more rear coverage, but I think the medium is still good. It’s a better fit than the other ones in my order. For reference, I take a medium size with aerie and La Senza unless it’s a particularly stretchy material.

All in all, the set fits decently, but not perfect. I think my next 3HC will be a cup size larger with reduced cups. Straps moved in are a consistent alteration. I don’t know if I can do 1cm as well, or if I really need the 2cm for my petite frame. And as said, I don’t know about the gore. I’m hoping to get some feedback from Anna on the fit of the two bras and I will update or edit this as that happens.

Cups are slightly too big/tall