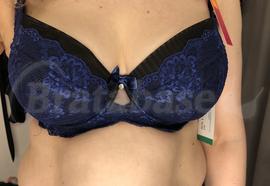 Sooo, as I was wandering around the store (Forever Yours in Langley, BC) pulling Ewas and a few other bras, the fitter helping me brought this one out to me to see if I was interested in trying it because they were just unpacking them. It’s actually still not even on their website yet!

I said yes, because I had wanted to try an SF while I was there. Not to mention, I love navy bras. And it echoed the Kleks with the little dangling sparkles. I was also curious to see how the stretch tulle upper was compared with the stretch lace. Frankly, it’s a really stunning bra! When I put it on, the fitter’s eyes just lit up!

I have to say, as this was the first SF I tried (the fruit bra was after this), I was very impressed! I got a great shape from the stiffened lower cup. The stretch tulle was smooth across the top of the cups. I thought the straps felt a bit wide, but I put my Wersal on over top of it and it didn’t seem to be any wider. This bra is an all lace band, and I can confirm that it was a snug fit. I feel like I had enough immediate depth, and I generally feel like I had a great fit. This was the second bra that I put on the love hook. In fact, I decided against this one in favour of the Bibi Black. I had a super difficult time deciding. Do I still want it? You betcha!

Interesting tidbit. So I was looking up the name on the label and it said Zmierzch (which is why I began to take pictures of the store’s tag). In a chat on IG, the unusualness of the name came up. I know that often the Polish names translate into something that makes sense or is relevant to the bra’s aesthetics. So I looked it up. The first hits I got were a summary for Twilight. So I thought, “no wonder it sparkles!”

Only here it’s listed as Blueberry which I happened to find as I narrowed my search down to SF styles. So that’s kind of confusing.