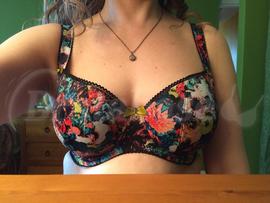 This was a giveaway that I was somewhat iffy on, because the last Freya Half Cup (Kiyoko) was a fail for me, but it looked like maybe it was different enough that it would work. That, plus my size and volume change last fall that made me think that maybe it would work. As a giveaway, I really had nothing to lose.

Spoiler alert: this bra does not work for me, but it’s *so close*!

Visually, this bra is stunning. I adore the print and details like the print extending onto the straps, the neon yellow bow and geometric dangle charm at the gore, and neon yellow bows at the straps. The straps are pretty thick, too. The print does cover the band as well. And the print is very colourful...black base with what I think is flowers but like an artsy style. There’s a tiny bit of black loop edging on the top of the cups. Is there a proper term for that?

The feel of this bra is very smooth and silky and I think it is actually made from spacer fabric. It’s kind of squishy and not terribly thick. It’s a 3 part cup with 2 vertical seams, slightly diagonal. I really like the feel of it.

Now on to the fit. My shape is tallish but shallow roots (functionally short), narrow to average width, and fairly projected and pendulous. My tissue is soft, center full and is even to fob...I think that my volume is pretty close to even, but I lean more fob functionally because my upper tissue isn't very full despite the volume being fairly evenly distributed. I’m not sure, but I think that my breasts might fit into the “long and lean“ description. I typically need lots of immediate depth and average apex depth. To a degree, my soft tissue is malleable which can give the occasional appearance that they are fuller on top, but that’s just them being tricksy.

This bra is surprisingly narrow for a Freya, however despite the 3 part/2 seamed cups, I simply don’t have enough immediate projection. I can feel it wanting to slip down my chest out of my imf pretty quickly. It’s a little bit better if I use the tightest hooks. I also have a bit of a compressed look. This is likely because I have tried to tighten the straps a little bit to minimize the small gaps. I also think that it’s a bit tall...it is not giving me cakes on a plate cleavage. It’s not really looking like a half cup on me at all.

I think that I have to experiment on a non working day so that I can get a better feel for it, though I expect to be resisting it. I have been having a really hard time with this bra because I like *so much* about it, but it’s simply not the best fit.