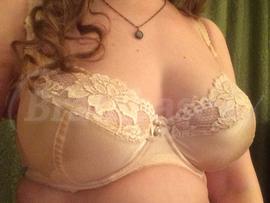 Here is a tale of my magical bra...

I found this bra in the listings, and although it had an (!) by it because it had been up for a long time without an update, I did actually hear back form the seller, although not right away. It was in my price range, within Canada, and one that I’d really wanted to try. Having a better feel for my measurements, I took a gamble to message the seller even though it was an old listing. To be honest, I was totally surprised that I even had a reply. She replied around the holidays and we set up a swap, and although there were a few hiccups, the bra arrived and I rejoiced! It’s so beautiful, and I had been really wanting to try a half lace BM after learning that they fit a little bit smaller then the full lace ones for whatever reason. Feeling like maybe my Cabernet was a half size too big made me suuuuper curious about the half lace BM fit.

This bra is a gorgeous shimmering champagne or pearl colour (hence the name), which is not exactly the colour that I would normally gravitate towards, but I needed a lighter neutral (non white) bra, especially as my 30E Curvy Kate Ellace in latte was too small and I hadn’t gotten a larger size in it. (This is actually the bra that I swapped for, with a few tea samples as well). It’s a surprisingly hard colour to match for underwear that isn’t especially made to match from Ewa. The pearl detail at the gore are beautiful as well. This bra sorta straddles granny with sophisticated glamour...it’s definitely not what I would consider fun. But it’s still utterly gorgeous. And I think that I pull off the colour pretty well on my fairly pale skin. The lower cup material is super soft and smooth. It’s also very lightweight. As mentioned, this is a half lace BM, so it’s not reinforced with the tulle inside, but it does have the stretch lace on top. To me, I think that the lace is somewhat more substantial than the lace of my Cabernet.

When I first got it, I messaged my bra fitting friend about it and the fit and she had asked me if it had more room at the wire, because I get wrinkles at the wire with my Cabernet and I said “yes, I think so” and sent off pictures. She replied back that “yes, it looks like it has more immediate projection but not as much lift” (but did say that it looked like a good fit)...I immediately felt defensive and was like “this bra fits me perfectly...it’s rounded and lifted and roomier at the wire and way better than the Cabernet” but maybe more in sentiment and not in the same words. A little bit later as I evaluated the fit and did comparisons with the Cabernet, I realized that she was right, with her infinite bra wisdom, and I apologized.

The measurements of the bra are nearly identical to the Cabernet, yet I feel like I have a whole different fit. Somehow it is magical. I think that it was brasaremean that said that because it is not lined, the cups have a little bit of droop, and I think that is precisely why it’s more rounded on me than the full lace. I’m allowed to extend down a bit more as well as out, which allows, me to round out some. Given my medium bust range, I’m not too heavy, so I don’t see it as a problem for me, but can see it as a problem for busts that are heavier than mine. A little bit about the band...it is a 70, yet definitely does not even stretch to 30” but as it’s not lace lined, it might stretch out faster.

My breasts seem to currently be average to taller roots, but deflated and shallow, thus making them functionally short, and on the narrow side. Fullness has increased with my growth from last fall, and while I am still center full and full on bottom, I have gained a little bit more upper fullness so that I am a little bit more even than I once was. My tissue is soft and malleable, which can make them a bit deceptive and tricksy at times, as well as pendulous. I need narrow-ish wires, immediate depth and center depth, but less apex depth because the deeper the apex, the less upper tissue I have to fill out the upper portion of the cups. I feel like I am contained in the bra and appreciate the lower gore and soft, stretchy materials. It’s a very comfortable and seems to work with my characteristics and shape.

After trying this one on, I feel like I have to own a few more of th half lace BMs, however I’m still going to try more of the full lace ones to see if my Cabernet is the rogue outlier or not.

Straps are Ewa straps...borderline too wide