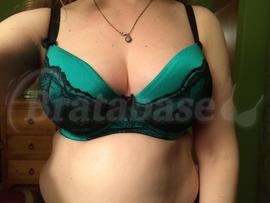 I’m probably going to regret writing this review at 1am, but I am still up for a little bit longer and I’m in the mood. Apologies for the typos that will inevitably happen in one of my many late night reviews.

This is the second bra that I received from Sonya to try. Well, it’s technically the first, as she actually offered to send this to me to try first, adding the CHP as an afterthought, however I recently reviewed the CHP so it’s kind of backwards like River Song’s timeline with The Doctor. It was sent, as was the CHP, for bra science. Both are styles and sizes that I was previously unfamiliar with. I had a 60HH 3HC but had never had a plunge from Comexim before, so judging how the 3HC fit, we thought the 65HH/30G plunge was a good place to start. And while I have 65FF in a PL and BM, I’d never tried a CHP but I knew that I had wanted to.

Of her 2 Comexim plunges in this size, the Jade had a better chance of fitting than the Sonia (which I had wanted to try) because it was a bigger stretched band length which I need. Needless to say, this bra is a gem of a stunner! I find that I actually prefer Comexim prints over Ewa’s a lot of the time. This one was apparently a Bra Obsessed exclusive which is likely why it’s got the UK size on the tag.

The foam cups for this bra are covered in an unbelievably gorgeous shade of jade green satin or satin-like material. This material extends all the way around to the band. On top of the cups is a gorgeous black lace that covers most of the cups, maybe about two thirds of the cup...the upper third is just the green satin. The lace covers the gore, and there’s a small black bow as well, and one on each strap where it’s connected to the cups. The straps are black and as usual, the back is a u back/leopard back. The black is a beautiful contrast with the vibrant green. There are 2 rows and 3 columns of hooks, but the spacing of the hooks is wider, therefore the hook pad is a bit bigger than some.

The fit of this bra is different from my Ewa Michalak PL bras. For starters, it’s a more rigid foam cup...my Ewas feel lighter and squishy by comparison. The gore is also higher on this one...it is closer to the gore of an S cut, I think. In either case, it’s low and not bothersome to me. I think I like it just a little bit taller like this. The cups on the other hand are taller, and not in a good way. My roots are taller but shallow and functionally short, so I have a little bit of gapping at the straps. If I didn’t know that you could get alterations like reduced cup and straps moved in, I’d be fine with the cut of this plunge, but it’s definitely on my mind for future plunges from Comexim. I feel like they are just a little bit too tall for me and in my armpits more than I care for them to be. I have taken pictures of my 65FF PL Zlote Oko over top for comparison. And I feel like my PL cups are a little bit too still. My center full soft tissue does want to spill over some, as it usually does, but I do feel like I am more strapped in with this plunge than the Ewa plunge.

The band on this one is pretty snug. I have not tried to wear it beyond taking pictures, but I would like to see how the bra fits if I use a row of hooks from an extender. My extenders are the wrong size to try. I went to La Senza on my last day off and they were resisting opening the packages to see what size I needed, and they would not let me try before buying. So I didn’t buy. They didn’t have any store testers to try which is strange. I went to The Bay, and while they did have extenders to try, it was the wrong kind. It hooks, has a bit of elastic stretch, then the hooks. This effectively is too much extra room. I had planned to go to my specialty shop, but I ended up surprise FaceTiming with my brother and his family and became a judge in the cookie contest that they were having (inspired by The Great British Bake Off they’ve been watching). There’s nothing quite like judging cookies made by a 7 and 4 (nearly 5) year olds obsessed with the show. My niece was doing the handshake and she tried so hard to give responses when they tasted them like she was a judge. Adorable! Anyway, cookies made me miss my window to get to the shop. I’d really like to know before buying how the extender will affect the fit of the cups, if at all.

The straps on this bra are pretty stretchy, but also fairly thick, and among the hardest I’ve ever had to adjust. They’re quite determined to stay the same length; the sliders do not want to move easily. I guess it’s good once you finally get the sweet spot....it’s unlikely to slip or change. But getting to the sweet spot might take some time. I feel like I have decent depth at the wire, but I have not worn it for any length of time to see if it’ll slip. The wires are nice and narrow.

Overall, I really like the bra and the shape I get with it, though it’s pretty visible under a snug shirt (you can see the seam showing in my picture). I feel like I can get a better fit with a cup size up and alterations (straps moved in and cups reduced) if I order directly or buy from the listings with those already in place. I do have the option of buying it instead of sending back, but I have not decided on what to do. I think that it’s highly dependent upon how the bra will fit with the extender and how much it would be. I hope to go to the specialist shop later this week when I’m off next. I’m sure I will get some feedback here for the bra too which will help me with my decision.

I hope this review helps someone.

Band borders on too tight, straps border too wide