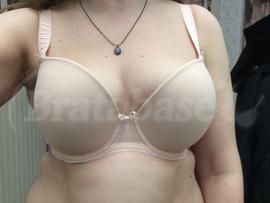 I have a thing about the Freya Deco. It’s one of the first bras I bought locally from the specialty shop that used to be in my area. I bought the Spotlight in a 32DD which I thought fit at the time. I never had a band issue, and at the time I was not used to 30 bands as I am now, not was I swooping and scooping...I was leaning forward to put on and juggling and thought that was enough and what I was supposed to do.

I wore it like crazy. It felt like boob armour compared with some of my bras st the time, but I got amazing cleavage and the shape under tops was simply unbeatable. I later bought the matching briefs and was in polka dot heaven. I actually still have it, although it is pretty stretched out in the band and I don’t fit the cups anymore.

Last year in the summer, the shop that I had gotten the Spotlight from was closing to move out of town, and had a big 50% off sale to clear stock. At the time, I opted to try the 28FF, knowing that the band might be too tight, but wanting to gage the cup fit as it’s the sister size for the 30F, which was the size I was thinking about needing based on the fit of my Spotlight. Well I was pretty surprised that it was a really good fit, but as I was thinking, the band was a bit too tight. I could have gone with a row of extender hooks and probably been ok. At the time, I decided not to get it, because even though the green was stunning on me, I was really not a fan of the animal print that was the straps and trim details. That, and the fact that I was wearing my Ewa plunge then and getting as good cleavage, with a softer and lighter bra. And even at half price, it was still expensive. I do miss the green though... I think back to this bra often.

Which leads me to this lovely little blush number. I tried it in a few sizes: 28G, 30FF, and this one (30F). I initially tried the 28G thinking that maybe the band was a bit too tight in the 28FF prior because the cup was too small. In my mind, I knew that wasn’t right, as the cup was pretty perfect in the 28FF, but I also knew that I had begun to see an increase in volume/tissue/size late summer or early fall, so I was not sure if I would need a larger cup size or not. I also picked the 30FF with the knowledge that the 28G would be too tight.

I could not get the 28G done up and switched to the 30FF. Surprised that I had a bit of empty space in the cups, I opted to try a cup size down and see if the 30F would fit.

It did and did not. The band tightness was good. I coul use loosest or middle hooks. Cup volume was better. Pretty perfect. The colour was nice too (a little bit pinker than the pictures show). The fabric covering the cups was super silky and smooth although this one was snagged. The thing that bothered me most about this fit was the cup height and cup edge. It seemed taller and maybe more open than the other ones I had tried. The top edge of the cups were visible under my thinner shirt and the camisole they had there to try. It was not quite as bad as the Kiyoko half cup I tried, but it wasn’t far off. If I can’t wear it under light tops, then I have no use for it as I would want it for lighter tops where I need a nude/fleshy/light coloured bra. Both fitters really loved the fit of the Deco on me though.

I don’t know if it’s just the colourway of production, or if it’s just the larger cup size, since my 32DD never did that, and and I don’t recall the 28FF being visible under my camisole either. I’m not super broken up about it as I was trying the Passionata Brooklyn in 65G again and I generally preferred the lighter feeling of it compared with the Deco as a summer t shirt bra, though I had minor quadding in it and no 65H to try (I might try 70G even though band is loose, just to see how the cups fit).

Anyway, I still really love the Deco and fit, though since I can get same fit from Ewa and Comexim without the boob armour, I will probably continue to pass the Deco up unless I find a really good deal. Plus, Bravissimo Satine is supposed to be good like Deco but better, but now I question my Satine size.

I am glad I tried it again, and maybe one day I will have a new Deco, but now isn’t that time.