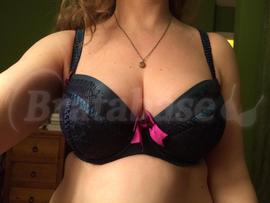 Here is the beautiful, and much coveted, S Syrena. Aka the mermaid bra. And it’s mine now. ALL MINE!! It’s been discontinued for a while now, but I’ve seen it in blogs like Big Cup Little Cup and it’s been on my mind since I first saw it. I love the colours and the eyelashe lace and everything...sigh.

So, I never actually thought that I’d ever be able to actually own it, and I’d be coveting it for the rest of my life. But in the last year of my time on this site, I’ve made friends with other members who are close in size (and sometimes shape) to me. Earlier this year, I received 2 bras from Sonya to try, as they were cuts and sizes that I had not tried before. They were learning bras, with the option to buy if I had wanted. After quite some deliberation, I sent both back, and included my 28G Cleo Lily parrot print, because it was just too tight for me, and the fit wasn’t good once I added the full extender. Sniff. But her rib cage is smaller than mine, and our shapes are similar, so I swapped it for the Syrena here. I had to wait until after I tried the 65G S bras that I’d had sent to me because the 65FF CHP XOXO she sent me to try was borderline small. In addition to the Syrena, I purchased the 65FF PL Milady (review to come).

So, the 65Gs fit a bit big for me without the cookies, but decently with the cookies when I got them mid February. This led me to want to try the Syrena in 65FF as I don’t really like to wear the cookies to make the bra fit. I need as much depth at the wire as I can get, and the cookies remove some of the immediate depth. I’m ok with the cookies on special occasions for the oomph factor, but it’s not a daily wear preference. And given that the S cut is not as deep at the wire as other cuts, I really don’t want to sacrifice the room.

As mentioned, I’m pendulous/projected and need immediate depth. My tissue, is soft and malleable which is sometimes tricksy. Roots are average to narrow width, average to tallish, but since the tissue is soft, it’s also a bit shallow or deflated, and therefore functionally short and full on bottom, even though I’m actually a bit more even (I’m just not very full and even). Supported, I’m much more close set than I appear unsupported, and I’m fairly center full. The S cut gore is a short one, but not as short as PL, and I find that it’s a bit more closed on top compared with the CHP, which makes it a good fit for short roots.

Let’s talk about the visuals...mermaid bra is mermaid bra. The base of the cups are teal with navy lace over top. The vertical seam ribbon cover is also navy, but the horizontal one is teal, which matches the straps, and the side wing seam cover too. Navy eyelash lace appears over the teal cup above the teal seam ribbon. The band is navy with a strip of teal contrast at the bottom. As mentioned, the straps are covered in the teal satiny crinkle ribbon, and covers a good portion of the straps, and therefore render the straps only partially adjustable. In my case, I feel like I have no problem with this. The ribbon section is pretty stretchy, and I have enough room to adjust, but some others might find it a problem. And now let’s talk about the hot pink bows. They’re always seem to be brought up in reviews and I will do the same. I have mixed feelings about them. I do like the contrast colour and I think that it’s a nice match to the colours of this bra. But I’m not sure if I am on board with the oversized bow at the gore. I think it’s a bit crushed between my boobs. The tiny ones on the straps seem ok, though I typically don’t like strap bows at all. All said, it’s a visually stunning bra, and it deserves all the coveting it gets.

Now onto the fit. When it arrived, I was a few days shy of my period, and I had a bit of spilling, mostly on the center gore half of the cups. That said, at the same time, the 65G S fit without the cookies (I updated pics in my Mojito to show the difference)...so with that in mind, I assume that the spilling was simply from high tide swelling. Since then, the swelling has gone down a bit, but I still spill a little bit at the center. I know it’s at least partly my soft, center full tissue, but I don’t know if it’s also just a tad bit too small overall. I’m reverse scooping and it’s pretty good, but not perfect. The band is the thickest and firmest of all my Ewas...just at the lower end of my comfort range. I’m not sure if it’s the material or construction or what. I’ve tried to compare with my other Ewas and I can’t figure out what the difference is, but it is definitely different. The wires are nice and narrow, but I feel like I am slipping a little bit through the day. And they feel like they are digging in. I’m not sure if it’s a band related issue or not. I think it’s a touch too shallow for me, but it’s possible that it’s also just from being borderline small. I’m curious if I would fit the 70F any better/differently.

I’ve got lots of cleavage, and I feel like I am pretty front and center, and lifted. Side profile makes me feel like my boobs are bigger than they are. Very much a defined profile in a snugger top. Overall, it’s a beautiful bra, and I think that it’s a decent fit for me, but it’s not perfect. To be honest, I still kinda want to see how rachaelll’s 70F M Syrena fits. I think that I prefer the look of the S from the front, as a balconette style, but the PL is ultimately more comfortable, even though a bit tall cups. Am I glad that I have this? You betcha! But I admit that I am slightly underwhelmed by the overall fit. It looks good but does not fit as comfortably as I had hoped. I wore my 70E S Szykus a lot because it was so comfortable, despite being a size and a bit small. Which kind of makes me think about the 70F/FFs.

I’m grateful to Sonya for the trade, since it was not listed (I’d stalked her bradrobe and asked if I could swap the Lily for it). It’s really a beautiful bra, lives up to the mermaid name. I’ll update with more detailed pictures later.