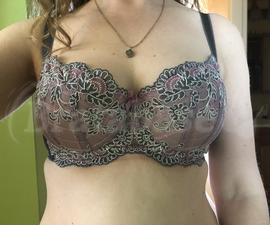 Wow, is this bra a stunner, or what?!

As many of my regular followers know, I’ve lost a significant amount of weight this year, and it’s affected my boobs. I’ve lost 2-3” off of my over bust measurement, so I’ve got a very limited amount of bras that fit, or sort of fit me now. My faves are Comexim and Ewa Michalak, and while I feel pretty comfortable with what size I can do in EM, not so much with Comexim, especially as most of my bras are altered. My birthday was in August, so I decided to use my discount with Breakout Bras and order an unaltered bra in a size smaller than I’d been wearing. I knew that my 70H - Comexim » Triss 3hc was once a titch too small, and now it’s a little bit too big, and my 65HH - Comexim » Scottie (648) was also fitting a little bit too big now, so I was thinking about trying 65H or 70G unaltered to gage the fit, because I really want to reorder my Hot Chocolate in a new size to wear. The problem was that most of the bras in the same cut had backorders on the sizes that I was interested in. This one, however, was in my size, and ready to ship with no waiting. It’s one that I have loved from the moment I saw it on Instagram. It’s also very similar to the 65HH - Comexim » Bridget Half Cup (554) that I was able to try a while ago. So I grabbed it!

My tissue is very very soft. Like pudding. I’m technically even, however because I have less upper fullness than I used to (which was still shallow), I fit more fob functionally. I’m also short rooted as a result, and center full. I need narrow wires, and immediate depth at the wire to accommodate my projection.

This bra is an unlined, 3 part half cup. The colourway is called Dove Brocade on the website, and it’s mostly a dove grey base, with pinky purple and white stitching. I think it’s kind of a flower pattern but, it’s a little whimsical, and I don’t know for sure what it is. The bow at the center is the same pinky purple, and the inside of the cups is lined with the same colour mesh.

So, the advice of the website said that the band was stretchy, so to size down if in between two sizes. The sentiment was also echoed here in the reviews. I was nervous about the size as I had also read that the cup size was running small. The previous unlined half cup was a 65HH though, so I suspected that it would be too large now. I normally take a 65/30 if it is a stretchy band or it’s got the extra set of hooks, or a 70 because they tend to fit tighter and more like a 30 than a 32. Due to the comments on the band, I opted for the 30, and almost a 28. I have to agree that the band is super stretchy. I’m actually wondering if I do need a 28. I feel comfortable in it, though once I tightened up my straps some, I felt like it wanted to make the band ride up. Loosely pulling with it on the loosest hooks, I can get 2 fingers underneath, comfortably...but, I can stretch it more and get my hand in. I readjusted the band position, and I don’t think it will move. I’m concerned that if I do size down, that it will wear out faster. As for the fit of the cups, I initially thought it was maybe too big still, or too tall, though I adjusted the straps a bit tighter than they were as they came, which helped. My small side is still gapping but, it’s ok on my big side, and I don’t think I can get away with a smaller size. The cups are lined with a little strip of clear elastic, which is usually a problem for me but, it seems ok here. Normally, I would have straps moved in 2cm but, I don’t know if it’s possible on this kind of bra, and like I said, I wanted to try totally unaltered to see what it was like (and BOB only sell unaltered unless you request alterations through them).

Anyway, I love this bra! I’m so happy with it! The only thing is whether I should swap it out with a 28G for a bit of a snugger band. I’ve messaged customer service about this and included a few videos for a fit check.

Straps are slightly too wide but comfortable enough, and cups are a smidge big but I think strap adjustment will fix

Straps are slightly too wide but comfortable enough, and cups are a smidge big but I think strap adjustment will fix