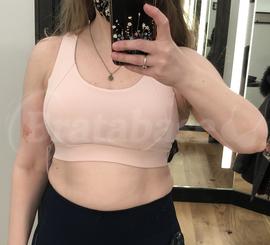 I’ve already written about this bra in three sizes (6, 8, and 10). This is the second review of the size 8. For the majority of the details, check out the other reviews. However, I will recap some.

I originally tried the 10...was ok in the cups but, too large in the band. I later tried the 6 on and omg it was so tight and compressive by comparison to some of the others that I have tried in the 6. I later tried the 8 but, I ultimately opted for the Free To Be Serene Longline in a size 6. I had to get that one shipped to me from another store as it was sold out online and locally before I had decided to get it.

I tried it on again in the 8 in the pink mist colour after I had decided to pick up the 23” Cropped Scalloped Wunder Under leggings in navy. The picture online shows the leggings with a pink bra and I really liked that combination...though I don’t know if I will be wearing it on its own with the leggings or under a shirt, but probably under a shirt so the coordinating colour is sorta irrelevant. In the end, I stuck with the Free To Be Serene Longline but, told myself that I would try to get this one next. Then I saw it went on sale and knew that it was to be. Oddly, the store by me had it at the regular price today but, the sale sku was available at a different store location so I have ordered it over the phone to get shipped to me. The shop assistant said that yes, it was exactly the same one, but that the “we made too much” sale items are under a different sku. So it was pay $54 CAD and get it locally today or have it sent out from the other store under the sale sku for $39 CAD and get it later this week. It’s rather nuts if you ask me.

So on to the bulk of the review now...

Just to reiterate what my size and shape are for relevance of the fit:

I have lost a few pounds in the past month or so and there is some slight variation in the measurements. I rounded out some from the in between figures. I do typically wear a 30F or 30FF because I have a weirdly sensitive chest and sternum and bands that are under 29” stretched without distorting the wires are painful even if they are technically the correct fit. I prefer a ttd or slightly snug 30 band.

I have tallish roots with shallow upper fullness. Vertically, I am a bit more even fullness but, I fit functionally short and fob due to the soft and pendulous nature of them. I’m center full as well.

I personally feel that having such soft tissue in combination with the compressive styles means that I risk the cup edge cutting into my tissue even if it’s a good volume. I simply don’t have the resistance. In fact, the picture for this bra shows someone who is much more rounded and fuller than me. As a result, I do actually prefer encapsulation sports bras but, they are a little bit more overkill for my current needs.

As I said, I find that this style is more compressive than the Free To Be Serene even though it is the same materials. The band is only slightly looser than I would like though the cups are fine. This is ok for me because I’m not using it for anything that’s higher impact. I’m going to one on one Pilates once a week (usually) and spend a great deal of the session on my back (supine) or sitting and occasionally on my tummy (prone). My bra needs are that it has to be somewhat supportive but, ultimately it’s got to be comfortable. So if it’s a little bit looser in the band than would be ideal for a traditional bra bra fit, I think it’s ok as long as I don’t slip out of the bottom and still feel supported. And sometimes the snugger longline and crop styles will actually roll up a bit more which is kind of a pain so it might be better if it is a little bit looser.

I’ll obviously have to wear it to a session and see how it is once I get the delivery (last time it was ordered on a Friday and delivered on the Monday morning so it should be quick).