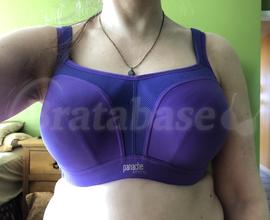 This is the second Panache sports bra that I own and the third one I have tried. I originally tried the 32DD and was a bit squished. The next one was the 32F which was fine but a little bit too wide and tall. This one is in between.

The cups do fit a bit better than the 32F and compress me a little more. The 32F is a very round shape, but due to the taller cups, I do have a little bit of empty space in the cups at the top as I’m soft tissue and functionally fob. The 30F is better at containing me evenly in this respect. That said, the cup height difference is actually pretty minimal. With so little difference I don’t think it made a huge difference in sizing down.

The band on this one is definitely tighter than the 32F which is to be expected from a band size down. I can do it up but it’s a bit more challenging. If I was using this bra for running or jumping and other high impact sports, I would say that the 30 band of this one (with this level of wear) is perfect but, I am doing none of those things. I’m wearing it for Pilates which is a lot more gentle and flowy with the majority of my lessons on my back and I think it’s going to be too tight for me this way.

There is a small snag in one cup which I was aware of when I bought it (it was already discounted) although I accidentally added a small slit with the scissors as I was opening the package. The slit is pretty small but it is in the mesh portion so I hope it won’t get bigger with wear.

Ultimately I think a 32E would fit me better but I’m not sure if it’s the right sports bra for me. I like the rounded and separated profile vs the uniboob look but I am not a fan of the cup height. That said, as long as it is under a top, it probably won’t be a problem. The 32F looks freaking amazing underneath my thermal zip top and my snug shirts even though it is a little bit of overkill for a bra for my needs. I have not tried the 30F underneath a top yet, so I might keep it and find an extender or I might just relist it and keep the 32F which I have grown fonder of since I got it.

Band is ok but too tight for Pilates

Band is ok but too tight for Pilates