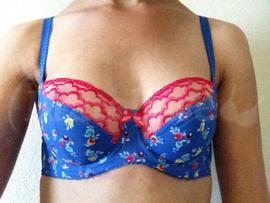 SS2013 - Unpadded balconette in a playful blue and red colorway More...
This bra is discontinued.