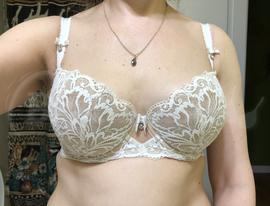 Sorry it’s taken me a bit to get to the pictures and review…it’s been crazy at work, and we’ve been forced out of our apartment (old owners sold and new owner is moving in) so I have been packing and moving stuff. Luckily, we found another unit in the building, but it’s a 1br instead of a 2br like we have now.

Anyway, I immediately messaged the seller as soon as I saw this listing. I tried a 65FF CHP a few years ago when my boobs were bigger, and it was almost too small so I thought I would try a size down since I have lost weight. I was slightly nervous about it though, because the other one was sort of east west looking on me, but I was never sure if it was the CHP cut or the actual design aesthetics of the XOXO.

I’ve always had a mixed feeling about the Antonina, as I don’t really care for white lace bras, but I think it’s the combination of the beige shimmer underneath that makes this one work for my skin tone. I’m pale but semi warm. I think that whites on me need to be soft and muted rather than bright and crisp for them to work. Though, as a bra underneath my clothes, this is less important. I think it’s a very pretty combination, actually, and had it not been for this site, I might not have seen that with the details of others posting about it.

On to the fit…as mentioned before, I lost 20lbs last year, and with that, I have had a change in my shape as well. I’m 1-2 cups smaller, and my already soft tissue is significantly less full all over than it was before. When I put this on, I was honestly a little bit shocked that even a full size down was still big on me. I’m glad that I asked for the cookies even though I didn’t think I would have needed them, because I absolutely do! You can see there is some significant gapping without the cookies, and that it barely fits with the cookies, to the point where I am actually wondering if I could do a cup size smaller. Wearing with the cookies does feel a little bit weird, and these cookies are a pain, but it’s narrow and deep enough that it does not feel too shallow. Unlike the XOXO, I don’t feel especially east east west in this one.

Overall, I like the bra, and I plan to hold on to it, as it gives me a little more room to grow if I add more weight back. It fits well enough with the cookies for now.

Fits better with the cookies; Ewa straps always too wide