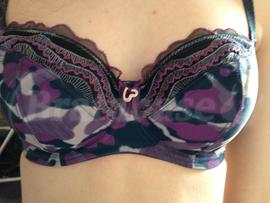 Very tight band (typical of Cleo lol). I think I lack the upper fullness to fill out the top of the cups, and there is a strange bulge, especially where the lace part connects to the rest of the cup.

The detailing/embroidery on the lace is actually really cute and I didn't notice as much in pictures! It definitely adds to my opinion of the bra.

I think this could be more of a FoT bra (I'm pretty even), or maybe I just need to try a size down, I'm not sure! My tall roots are definitely affecting the fit at the top, but even if my breast tissue were concentrated lower I don't think I would have enough tissue to fill out the top. I will update review later.

Edit: removed the following because it was simply due to the underwires being pushed to the other end of the wire channels:
"I think the gore was bent outward and is the reason why it doesn't sit perfectly flush on my skin, but it's also migrating sideways as if it were too wide. I've never had a problem with wide gores, so I think that it may just be because the gore is bent too far. I will try to bend it back some and see if it helps."

lace at top doesn't lay flat at all though that doesn't translate to pictures. doesn't seem to be an issue under most shirts, however

lace at top doesn't lay flat at all though that doesn't translate to pictures. doesn't seem to be an issue under most shirts, however