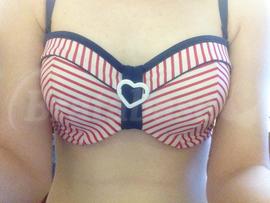 I have wide, even breasts with tallish roots. Here comes the weird part: I normally fit into 30DD/28E Cleo/Cleo Swim tops. The original owner of this set said they thought it ran small in the cups; while waiting on it to arrive, I ended up snagging a really cheap 28E one, thinking I would sell the one that didn't fit. The 28E - Cleo Swimwear » Lucille Padded Bandeau Bikini (CW0063) fit, and I will reproduce the review below in a second. But, this 30E ALSO fits! The band is definitely noticeable looser, but somehow it fits! It doesn't seem to be too big! I retook my UB, standing bust, and leaning bust measurements and they are the same as always. I have no idea how this is happening!

Review from the 28E:
I have wide, even breasts with tallish roots.

I was worried that this bra would cut into my tall roots and look bad, but it surprisingly does not. On close inspection, I guess there is a very minor bulge, but I consider it to be virtually nonexistent.

From other pictures I've seen, it looked like the underwires were sitting way below the IMF fold due to being very shallow in the bottom of the cup. However, this is just excess fabric on the bottom that makes it appear that way.

The band is very firm. I feel very confident in wearing this as a bandeau by taking off the removable straps. I feel it fits similarly to other Cleo 28Es, though I will also be soon receiving a 30E, so I will be able to compare them.

The bra has one vertical seam in each cup, towards the center, on the outside and inside. The outside seam is covered by the overlapping fabric where the chevrons complete.