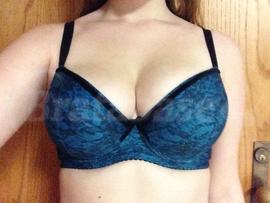 I fell in love with the colorway of this bra while browsing Wellfitting, but I ordered it from Comexim because it was honestly cheaper. I ordered a 65H which turned out to be too small, sadly.

The blue is absolutely eye-popping. One thing I love about this bra's appearance is that it is printed with a lace pattern (and I love lace patterns) but doesn't have any actual lace, so it won't make an odd texture under thin tops. At first I was worried that the velvety strip at the top would negate that no-texture-through-shirts thing but I don't think it's too obtrusive.

Of all the Comexim bras I've tried (excluding the Basic) the Georgia has the least forgiving cup edge. Maybe it's because of the velvet strip sewn in, but it cuts in more quickly than the other cups do.

The material is very comfortable and strong-feeling. It's the sort of thing you could wear around all day without any discomfort. The band is pleasantly firm without being too tight. The wires are nicely narrow and the straps don't dig into my armpits. Great bra, wish I'd bought it in a better size.