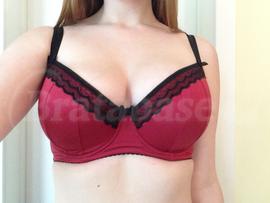 So I bought this bra in a batch with three 65HHs from Comexim, because I had heard that you should order one size up in Comexim half-cups. I will say, it measures more like a 65HH than a 65J, so I guess that makes sense--fortunately for me, I do fit the more open 65HHs!

So the color is this rich and lovely red, but I really appreciate that the straps are black. I like having dark straps because they draw less attention than colored straps, and my bra straps show a lot.

I really like the design of the half-cup. The seams don't scream out at you through clothing and the top edge of the cup isn't as abrupt as some other half-cups I've tried, meaning it doesn't really show through clothing either. I like that the design isn't crazy over the top, like my Debenhams red half-cup.

This doesn't put my breasts as up and out as other bras, but I like the gentle swell of boob that it produces. It would work well with a low-cut scoop neck or under higher necklines when I don't want my boobs to be the center of attention.

I like that it's a red and black bra but it's more sophisticated than sexy. The Queen of Hearts bra made me feel dangerous, but this feels like a good working bra.

The cups are definitely wider than Comexim plunges, which was disconcerting at first, but they're still narrower than most bras in this size range and still totally wearable. This does mean that the straps are set a little wider than normal, but they're not terribly irritating and I can totally wear the bra all day, which is all that matters.

Really comfortable and flattering bra. I'm glad I got it.