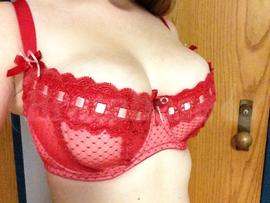 I got this bra for very little money, which was great, because I was pretty sure it wasn't going to fit and there was no way I was paying full price, even though it's a lovely color. Surprisingly, it's not that bad.

I'm usually a 30FF/28G, and I elected for a 28GG because a) the band was listed as being a little stretchy, and b) the shallow cups inspired me to size up for some more room.

The fit's actually pretty okay. The straps are set too wide, but I don't mind tooooo much because they're actually surprisingly soft. The cups are kind of flimsy and soft and just kind of ridiculous looking, because they're so frilly and flouncy. I like them, they're just fun.

From the front, the bra looks pretty unimpressive. But from the side, it's like, oh, hi, boobs! Which is kind of fun. Since it's so soft and comfortable, and I got it for a song anyway, I think I'll keep it as a fun night out or lingerie bra. I can't wear it under most of my clothes (so. fluffy.) but I can wear it around when I want my boobs up and out.

I'm already wearing the bra on the second hooks, but as I don't anticipate using it as an everyday bra I'm not terribly worried about that. When I slouch heavily I get a little bit of gaping but my normal sitting style doesn't result in any. The lace at the top sticks up on its own.

So comfy, so fun, so ridiculous.