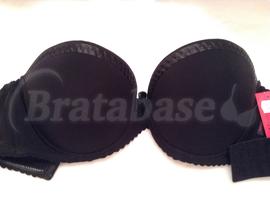 I bought the 70F and 65FF Ewa Michalak Strapless Black to see which fit better. My main issue with EM bras is always going to be wire width. My root is medium, I think. Because the wires take up more of the total band in the 65FF than the 70F, I expected more side tissue to be captured in the former. This is indeed the case. I get less side tissue escaping and more cleavage showing in the 65FF, so that's what I'll be keeping.

The big draw of EM bras for me is the low center gore in some styles and the relatively low amount of coverage in the cups. Some people found Ewa's strapless bras were too shallow at the lower cup to accommodate their projection. I have average projection for a 30F/30FF. I feel lucky I can get a great shape in Ewa's strapless bras. I shopped around a lot because I like bras. Finding a strapless that doesn't flatten me out and doesn't have a painfully high and/or wide gore is impossible, except for this one.

The profile was uplifted and rounded on top. On my petite body, my breasts are full on top. Because of my height, they are functionally even. I believe the lifted and rounded shape I get is what Ewa intended with this bra.

Update on this bra:
My attempt to return this Ewa Michalak Strapless Black in 70F failed. Apparently the Polish mail service just couldn't get it to Ewa Michalak's address. The USPS couldn't figure out why. It took months for the package to get back to me.

After it bounced back, I decided to wear it a couple times. Maybe it could be useful after all, right? Stranger things have happened in my bra life.

Well, that was another fail. I recall when Ewa had the Strapless for sale on her site. The description said not to size down in the band. It assured us the band, with its silicone edging the top and bottom edges of the band, was tight enough.

I would like to tell Ewa Michalak strapless bra shoppers out there not to size up in the band either. I wear a 30 band in my dozen or so Ewa Michalak 3D and PL bras. Some of those bands are absurdly tight and should be labeled 28s. However, those that stretch to 29" or 30" or even 30.5" work well for me. This 70F strapless bra did not. Twice I wore this during days I was in climate controlled environments, weeks apart. Each night I found the band had slid down my back a couple inches. Oddly, the underwire, on the front of my body, was still in my inframammary fold. The movement of the silicone edging the top and bottom of the band caused pain. I woke up the next morning to find the chafed area on my back had thickened and hardened. It took weeks to heal. Though these incidents happened during the summer and fall, weather was not the culprit. I was never sweaty or overheated. My work is not physically demanding, so the band shifting didn't happen because of my body's movements. The only unusual thing about this particular Ewa bra among my other Ewa bras is the 70 band size.

For comparison, I just tried on one of Ewa's 65FF strapless bras and one of her 65F strapless bras. The 65FF strapless was a pain to get on, but once I positioned it correctly and then swooped and scooped, it felt comfortable and secure. The shaping was awesome. The 65F was also a pain to get on. It causes quadboobing and a slight flattening effect when viewed from the front. I'm pretty sure now that sister sizing up to 70F to have an easier time fastening the bra was a mistake. This may work okay on bras with straps that don't have silicone edging. I won't be doing it again with a strapless bra or any bra with silicone piping..

I asked Kaska about a year ago when they were coming out with more strapless bras. She said that Ewa hasn't found the right materials to do strapless bras again. The way Kaska phrased it, it sounded like perhaps Ewa is aiming to accommodate those with more projection than I have, while achieving the shaping I, with my average projection, get in her previous strapless construction.