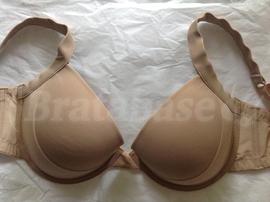 I can't believe I am getting a good shape from a partial band bra. Even though I quad a bit, it doesn't show under thin clingy tops. so I'm happy. I normally wear 30 bands, but this 32 band is tight enough on me. It is tight enough to push my firm breasts around, in this case to the front and center. It is not, however, as tight as a Cleo 30 band.

If Ewa Michalak were making a t-shirt bra, I'd probably already have one of hers, if it were a plunge with low coverage cups. The Addiction seamless plunge has pretty low cups, though, just like the Addiction full cup bra I also reviewed.

I found this line, Addiction Lingerie, in the Addiction boutique in San Francisco. I had never heard of this brand.

The straps are partially adjustable. Luckily they go short enough for me, even though I'm petite. The straps are thick and soft if institutional looking. On the lower third outside of the cup is a very thin layer of mesh, which barely shows under a really tight top.

The wires go high under my arms and there is side boning. I feel that this bra deals quite firmly with my side tissue. It's a pretty cleavagey bra, even for my super firm tissue.

On the 32F size, it has 3 rows of hooks and eyes. The rows are really close together, compared to most brand's 3x3 rows. It's not sexy or pretty, but boy do I need this bra.

It has removable pads, which are plastic packets half filled with water. I've never seen pads like that! If I leave the pads in, I quad boob severely.

This is kind of a dark beige color with a not particularly attractive greenish gray cast. It will however function as a nude bra for me.

The manufacturer's product photos show the model NOT wearing the wires in her inframammary fold. This is NOT how I wear it. My fit checklist and my review are of the bra properly adjusted and after scooping and swooping.

Quad boob but it does not show under thin clingy tops