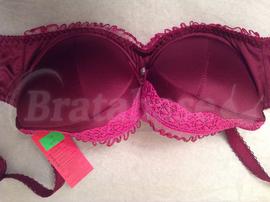 This is perhaps my 20th Ewa Michalak 3D bra in 65F, and it ticks all the boxes: low gore, straps more set in than many bras' straps, and low coverage cups. The band is perhaps a little firm for what I hoped to be equivalent to a 30 band. It's fine with an extender, and it probably wouldn't take a year of wearing with an extender to loosen up, as I've had to do with the 3D Szykus.

I ordered this because I like burgundy, and I've been waiting for Ewa Michalak to do a color like this in 3D. Unfortunately the pretty little frill at the top of the cups, which is set in the top of the cup but extends upward above the cup edges, shows under my favorite T-shirt. I mostly wear more structured clothing. For a bra to show under one of the few T-shirts that goes with all my skirts and doesn't show any cleavage whatsoever, is annoying. That, and the fact that I have about 25 bras in regular rotation, led to a decision to sell this one.