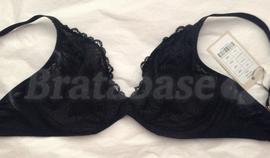 Stella is a new Bravissimo style. It looks like a bralette, but this triangle bra has underwires. The cups are unlined, unpadded, seamed lace. The gore is extremely low. This super low gore was the main selling point for me. Most plunge bras are still too high for me in the gore area. When I wear an Ewa Michalak PL or 3D all day and then try the Stella on, I can see where the PL or 3D's wires were lying on breast tissue. Stella's gore is mercifully low and narrow. The narrow part is important, because sometimes a short gore will still be too wide. Sometimes a short gore also starts too high up compared to the lowest point of the underwire. A short gore doesn't do me much good if it's positioned where the top half of a tall gore would be on my chest.

If I hadn't read many Stella reviews saying to size up in the cup, I wouldn't have ordered both 30F and 30FF. The 30F technically fit. In a too small cup, I usually get spillage under the arms. I don't get that in 30F. However, the 30FF has a rounder, more projected profile and is more comfortable than the 30F. I returned the 30F. On the return paperwork, I requested an exchange for another 30FF. Bravissimo's website says 30FF is sold out, so we'll see. I hope they come out with Stella in a nude-for-me color. I believe the lace would be opaque enough in a nude-for-me color to be the perfect summer bra.