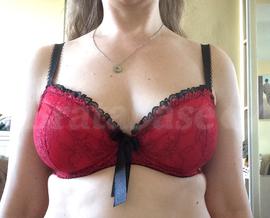 I’m going to be honest here and say that I only purchased this bra as an experiment. Well...experiment isn’t *quite* the right word, but in essence, I purchased this because it was within my price range, and the measurements closely matched the 65F Mp Kleksik that lcl0706 had previously (graciously) sent to me to try (as I’d never had/tried EM until the Kleksik I tried) but it wasn’t really a style that I was actually interested in. It’s not something that I’d have seen on website and said, “what do I have to sell to get this?!” or know that I had to have. But, I really wanted to actually own an Ewa Michalak bra, and the price and measurements overruled my style preference as I mentioned. Let’s just say that I GOT THIS BRA FOR SCIENCE! Ha ha!

Before we go on with the review...my boobs: narrowish and tallish (but deflated and functionally short) roots, even to FOB, center full, soft and malleable tissue, and pendulous. I need depth at the wire, but only average apex projection. Thanks, pudding boobs! https://d28qt14g3opchh.cloudfront.net/smileys/icon_wink.gif" alt=";)" />

Since I got it, I have to say...it’s grown on me quite a lot now, and I really love it! I felt odd, at first, that I was able to do it up without needing to use an extender right away, as I had had to do with the bras that I had received before it. It felt positively loose by comparison! I’m comfortable with it on the loosest hooks, but sometimes move it in one. As for the fit, as it’s a plunge, I have a little empty space near the straps which is super minor, and as I am center full, I do spill a little bit at the lower gore, moreso just before my period when I swell up more. Neither are a dealbreaker, considering the cleavage, errr...I mean the SHAPE that the bra gives me. Nice and uplifting, as well as rounded. And sexy.

Aesthetically, I have a few quibbles. First off, the ruffles at the edge of the cups show through some tops/clothes so I have to be mindful of what I wear over top. Second, the bow is comically huge. I’m fine with big bows. This one is ridiculous. It’s also somewhat ticklish and/or itchy. It’s ok if the shirt is snug enough to stop it from moving, but if it’s too loose, I tuck the tails under the gore. I’m toying with trimming the tails some. The other problem is that the bow really wants be vertical. It’s constantly flipping sideways. I’m constantly trying to straighten it. I’ve considered seeking an opinion from a seamstress if anything can be done without changing the look of the bra. Anyway, minor issues as I said. I’m happy to say though, that I have found a pair of underwear locally that is a really good match! So I’m really liking this set when I’m wearing the right kind of top. https://d28qt14g3opchh.cloudfront.net/smileys/icon_wink.gif" alt=";)" />

Slight gapping at the strap; minor spilling near gore on my larger side

Slight gapping at the strap; minor spilling near gore on my larger side