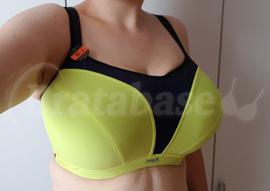 It's a very comfortable bra. The padding is rather thick but it adds only 2 cm to my breast perimeter compared to a regular bra. The wires are rather wide and the cups come up rather shallow. The bra is made to push the boobs close to chest and seperate them at the same time. The gore is very wide in this bra, so it does not tack. If I would made the gore tack, then I had some light overspill because the cups are rather shallow and not tall enough for my boobs.

I think in my size and with my shape the bra is not supportive enough for heavy exercise. (I would not run in it, but then I never was into running, I would rather need the bra to do light exercise and for that it will be good.)

The straps are very thick and comfortable. The whole bra is rather nice feeling, I don't have anything to complain for now. The band runs tight and fits me just a little snug but not too tight (I can fit 2 fingers under the band but not a whole hand) I don't think I would have to size up to a 34 band. I also don't recommend sizing down, If you are between band sizes, always choose the bigger in this bra.

It's said that the cups come up big in this bra. I agree if you have short boobs that are not very full on top it could be that you need to size down. For me it's not the case and I think that a 32JJ would be the best size for me in this bra. (I usually wear 32J or 32JJ)


A note on the appearance and shape. The shape from the side is very round and uplifted. From the front the shape is a bit wide. My boobs look 1-2 sizes bigger in this bra. But they look very nice and round. I would feel confident in this bra. Looking good while exercising is motivation too and this bra will look very good.

I will update here once I decided if I keep the bra and how it held up with some exercise.