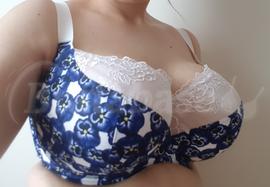 I almost did not give this bra a proper chance because I did not like it's print. At first I thought it's slightly too large because I had some gaping on top. The bra also looked a bit pointy. Both is now gone with my PMS boobs. So the perfect PMS bra for me? I really can't stand too much pressure on my boobs during that time, so thise bra is roomy and projected in top and bottom. The shape is very forward facing, uplifted and centered. It's a real confidence boost as it gives a slimming look from the front. However from the side, the boobs are quite round and projected, they stick out more than in other more "shallow" bras. I would say it's a green shape (check out brasIhate blog post) but it's rounded enough to not be elf-shoe.

The fabric is nice a bit thicker but not bulky, The lace has no stretch. The bra is very open on top, so do size down 1 cup like they recommend on the Bravissimo page. I also say it's fot friendly. I usually have quadboob in most of my 32K Bravissimo bras so I say this clearly runs big.
The wires above J- cup are different. I don't notice that much, but I think it's the overall more projected centered shape they give instead of the more east - west shape of older bras. The band has normal stretch, it's tts for 32 and a good fit. Straps are thick and not too stretchy. I have sligh issue with them being a bit too wide - set and the cup fabric on the side comes a bit too high but it's bearable. I think this bra is as good as it gets? I certainly have seen far worse.