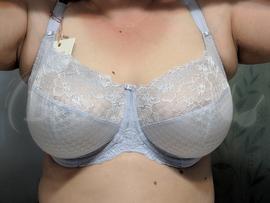 Envy was the very first bra I purchased since finding my true size. It was also the first I returned - the next day after I discovered that when I got it to sit in my IMF, it poked my armpits like a son-of-a-gun. That first one was a 36HH, and I think now the cups were slightly small, as I have pictures of the gore not quite tacking. I think that made the wires pull too hard against my ribs, because it would start to dig after a bit, something I have since noticed Panaches doing when the band is too tight. In fact I later tried Envy again in 34JJ to try to alleviate the problem, but although the cups fit better, I still got some digging in.

But I love the design and color of the Envy, so I tried one more time with this one. It seems to fit fine (with the exception of the too-long wires that are frequently threatening my armpits that all Panaches have in common), but I am probably returning it anyway. I don't know, maybe not - I took it out of the bag for one last trial. But it isn't quite projected enough and the shape it gives is so very similar to the Elomi Morgan, which is so very much more comfortable, that it seems like I should just get another Morgan.

The 36J (and the 34JJ) gives a more elongated shape; the 36HH gave kind of a flattened shape. Something right in the middle would be ideal.