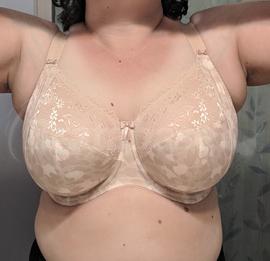 I keep coming back to Morgan. The 36HH - Elomi » Morgan Banded Bra (4110) was the first bra I kept from Nordstrom's at the beginning of this journey, and I've tried it also in 34JJ - Elomi » Morgan Banded Bra (4110). The 36HH didn't quite tack and the band rode up, so I initally thought the smaller band/bigger cup of the 34JJ was better. But when I went back to Nordstrom's, the fitter convinced me to try this 34J. Even though it has the same volume as the 36HH, this one does tack. It seems like the best size for me in Morgan so far, but I am concerned that the cups might be just a smidge tight.