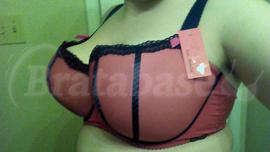 After having the S cut I tried not work out, I decided to give CHP a try. 85GG is the closest to my size that the CHP is available in without going for custom orders or anything like that, so I decided to give it a go.

The cups are still too tall - without the inserts, I wouldn't be able to wear the bra. But with them in, the extra height is pretty minimal and with a t-shirt on is basically unnoticeable. A keeper!

I like the deep red color - it's much less pink and more red than it appears in pictures on EM's site. I'd've prefered a bright pink, but red works too. The detailing is simple - deep navy on the seams and underwire channels, deep navy lace at the top of the cup, and bright pink bows on the straps and gore. It's not quite sexy, but is cute at the same time.

The fit is pretty good, other than the cup height. Wires are actually slightly wider than I had expected, but not too wide for me. The band is stretchy and like the last 85-band EM I tried, likely actually somewhere between a 36 and 38 in length. Which is fine for me, as my snug underbust is usually around 36.5. The pocket for the pads is kind of annoyingly-placed and getting them in can be tricky, but not a huge issue. I did find that the end of the wire channels, under my arms, feels...weird? Like, it's not poking my arm pit, but I don't think it's 100% flat? I'm not sure. It looks okay, but it's rubbing my arm a bit. Though likely that won't be an issue with an actual shirt on.

It's comfy to wear, and as I said, the extra height is hidden with a shirt on. It also made my breasts look *much* larger. Like we're talking a cup or two more, thanks to both the padding and the inserts. I really don't need the extra oomph that much - I wear a 36HH already - but it's pretty damn impressive.

It ain't perfect, but it's definitely good enough, and I think CHP is my EM cut. Now I'm just wondering if going down to an 85G will get the cup height low enough without sacrificing the rest of the fit.

Underwire length:
Runs too high under the arm, it pokes
Top of the cup:
Wrinkles, can't quite fill it

Underwire length:
Runs too high under the arm, it pokes
Top of the cup:
Wrinkles, can't quite fill it