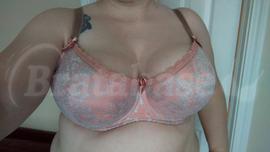 This bra's measurements have been altered
Altered straps, Straps moved in 2cm

After about a year of wondering whether or not I should try Comexim, I went ahead and placed an order. My size is outside of what they list on their website, but they were willing to make it for me anyway. I ordered Sonia in a three-part half cup, size 85K, with the straps moved in 2cm and cookie pockets added to the insides of the cups. The size was a guess, but it appears I guessed right!

The bra is, first of all, absolutely gorgeous - pictures simply do not do it justice. The peachy-pink of the cups, overlaid with the silver lace, is just beautiful. The straps are a different color - a nice darker tan - and the gore and straps are decorated with bows made up of two ribbons, one in each color. The pink is too dark to be a real nude on me, but it still blends close enough that it's not very visible under a thin shirt. The way the seaming is done on the cups is virtually invisible under a thin shirt. I find it much less noticeable than the seams on my EMs.

The bra is also very, very comfortable. The straps are fully adjustable, which isn't something I need but is nice just the same, and they are not too far apart for me. The padding of the bra itself is actually thinner than I had expected, which is nice - it's already getting to be too warm for padded bras where I live, so it's nice to know I can actually wear this bra right now. Also, because the padding is thinner, I don't get bunching around the armpit area, like happens with my EMs.

As for the fit...it actually fits me pretty well! Due to my shape - very projected, narrow, very short roots, lots of bottom fullness - I have a tricky time getting a good fit in most bras. The gore doesn't tack completely, but Comexim has very soft wires so I was expecting that to be the case; if I press it down I do not get any quadding. There is plenty of projection at the wire (which I need), and a good amount of space in the center (which I also need). The cups are just a hair too tall, especially towards the center on my smaller size, but I adjusted the straps and stuck a pair of cookies in from one of my EMs, which makes up almost all of the difference - the pictures are before I adjusted the straps. Under a shirt there's only a tiny bit of a crease on my smaller size where the cup sticks up just a tiny bit too much. The wires are shorter than the channels, so I adjusted them so that the empty space is in the gore which helps it sit a bit more closely. The band runs just slightly less than true to size; I went with 85 instead of 80 and it measures just under 38" stretched. The wires are a good width for me, and while the wings measure as being high, they don't poke my armpits at all.

I will absolutely be ordering from Comexim again. I love EM, and CHP is amazing for me, but 3HC works almost as well, costs a lot less, and I can get customizations done on it for free. That right there makes it a winner for me, and I am very pleased with this. I think if I order a 3HC with a lowered gore and overlapping wires, that'll solve the few small fit issues I have with this bra.