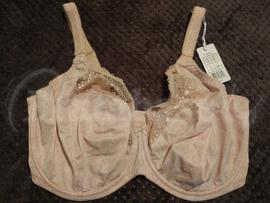 Finally ordered some new bras, and for the first time in about a year and a half I've got some that fit again!

Some important info: I had a baby in June 2018. Before pregnancy, I generally wore 36H/HH, and had very short, very narrow roots.

Now: a bit wider and slightly taller roots, a bit more full overall. Still need all of the depth at the wire I can get. ABTF calculator suggested 38HH. My shape before meant that it would tend to overestimate my size by a cup, now I think it's either spot-on or maybe a slight underestimate.

I tried some 38H Elomis and they were too small. Ordered some 38HHs and ta-da!

I like this bra. The color is slightly darker than my skin tone, but not enough to really be an issue. I like the pattern on the fabric and lace; it's just enough for some visible interest but not so much it's overwhelming. The gore is high for a plunge, but that's to be expected in this size range really. The band is very TTS, which means it's actually a tiny bit tighter than I'd prefer, but it's not uncomfortable at all, and I'm sure it will loosen up a bit as I wear it more.

The sides are a bit too high, but it's not uncomfortable, it's just a bit annoying. It's a wider bra than other recent Elomis I've tried, but that's fine. I don't need as narrow a wire as I used to anyway. I do have the same issue I did with the 38H Elomi Morgan I tried, where the side support sling causes some vertical in-cup quadding, but it's very slight and not visible under clothing. I think that might just be one of those things my breasts do now.

This bra is really comfy, though, and I'm really happy with it. It's nice to have ones that fit and feel good again.