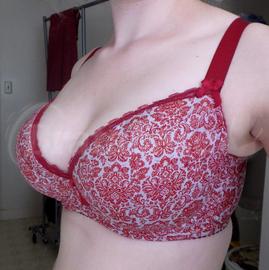 I'm not 100% sure about this bra. I was very excited to get it; my first purchase of a used bra, my first bra from Bratabase, my first red bra, my second Comexim. As soon as it arrived I excitedly pulled it out of its package and set to taking pictures of it.
It looks good on. It measures great. I think it's very pretty. The fabric is super soft. I don't think I've ever had a bra with such soft fabric.
But I'm not sure the fit is perfect? Maybe it's because the band has stretched out. I first put it on the 2nd out of the four columns of hooks, because I immediately felt that the last would be too loose. But I didn't actually feel supported - when I walked, my boobs were still jiggly. So I washed it (and was surprised to see a bit of red colour run; the colours don't look any different after, so I won't worry about it) and put it on again on the tightest hooks. This was a bit better. I wonder what that means for the longevity of this bra, or other Comexims. I haven't worn it for longer than a few minutes at a time, yet.
Also one of the underwires squeaks a bit when I move. Not too worried about that, but it's a bit odd.

To summarize, I'm happy with this bra's appearance and initial comfort, I'm happy to have bought it, I think I'm happy with the fit, but I worry that the longevity will be mediocre. https://d28qt14g3opchh.cloudfront.net/smileys/icon_smile.gif" alt=":)" />

ETA [07/18/15]: So I've now worn this bra several times. It's very comfy, and again, I love how soft the fabric is. The stretchy band makes it less supportive (running or jumping in this bra is definitely noticeable), but it's still quite wearable.