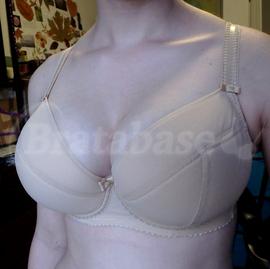 I'm pleasantly surprised by this bra. Everyone talks about the Comexim Basic (170), so I assumed there was some reason the Elena wasn't as good a choice for a basic nude bra. I decided to get it because I wanted to try a strap modification I have in mind, and thought I might as well have something slightly different than what I already have. I also asked for the straps to be moved in 3 cm, which I think they were? It's a little hard to tell.

When it first arrived, I was a little worried because I seemed to want to quad out of it a bit. It really seems to walk the line there, depending on the day. Sometimes it does a little, sometimes it doesn't. But it's still very comfortable, so I've decided not to worry about it.
The band is nice and snug and fits great on me.

I think these seams are the least show-through of all my bras, which is awesome.
The details (little bows and such) are the same colour as the bra, and not that weird brown plaid that seems to be the case with older makes of the Elena. I definitely prefer this, and had planned on removing them if that were not the case.

I'm glad I have another go-to nude bra. https://d28qt14g3opchh.cloudfront.net/smileys/icon_smile.gif" alt=":)" /> I haven't yet tried my strap modification idea, partly because it'll really be a shame if I mess it up so this bra is unusable. But I will update here if I do attempt it, and meanwhile I will continue enjoying this as a regular bra.