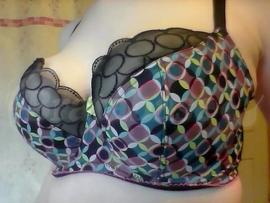 I have mixed feelings about this bra. I think the design on it is so lovely, but I agree with another reviewer that the shape is just strange.

As the other reviewer said, the middle part of the sides are pulled tight, giving the appearance of a sort of "dent" in your breasts. It's really odd. I also get the same issue of cup-quadding and lace gaping, although it seems like that's a running trend with my bras so far. I have problem with the gore, too. Even though it's the same width as my other bras, I guess because of it's height and where it lands on my sternum, for some reason it pushes my boobs apart really far. Too far, in my opinion. The bottom of the bra, under the wire, curls up which looks bad.

Despite the weirdness, I still think it's comfortable to wear.

Top of the cup:
Cuts into breast tissue (quad boob effect)
Cups separation:
Too separate for my boobs

Cups separation:
Too separate for my boobs