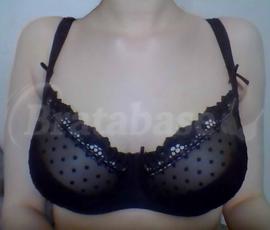 The Good: The fabric of the cup is soft and comfortable, and the bra is very sturdy. It gives a lot more support than one would expect from a soft cup bra. It also has a nice, round shape.

The Bad: The little dots can show through thinner shirt material, giving your boobs a lumpy look. Definitely a bra for sweaters and hoodies, rather than tanks and blouses. I also found the ruffles on the straps to be a little itchy, but this was pretty easily fixed by loosening the straps a bit. The straps are also too far apart for my liking.

The Ugly: The gore on this thing is just killer. These underwires are industrial strength, that's for sure. They're so thick and sturdy that they bite into the breastbone to the point where I couldn't wear the bra for more than a half hour, and my chest was sore after taking it off. Luckily, I was able to remedy this by bending the wires at the gore away from my sternum. After periodic episodes of bending throughout the day, the gore eventually became bearable. This could possibly just be a result of me getting a band that was too small, but regardless the band itself feels fine to me, so I'm leaning towards it just being the make of the bra.

Overall, I'd say this bra could be better, but it's definitely capable of a comfortable fit with a little effort.

Center gore comfort:
Underwires dig into sternum, because they are too high
Strap separation:
Are too far apart
Cup's width:
There is empty fabric on the sides (Cup too wide)

Center gore comfort:
Underwires dig into sternum, because they are too high
Strap separation:
Are too far apart
Cup's width:
There is empty fabric on the sides (Cup too wide)