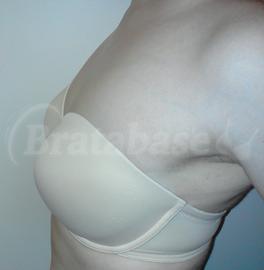 My shape: projected teardrop/FOB with super wide/tall roots and very close-set tissue in the middle.

This review is for the nude colorway.

The Search for a Strapless Bra, Part I: The Beginning


I just got this bra because I didn't own a strapless, I had a cute off-the-shoulder top to wear, and it was the cheapest I could find in my size. It's alright, although I should note that I am not generally a fan of strapless, whether it be bras or anything else.

I always have trouble with strapless stuff (dresses, tops, bras) making an inadvertent quad-boob effect not because they are too small, but because I have very tall breast roots, and nothing strapless is ever cut shallow enough on top for people my shape, with the exception of some corsets that have all the boning to support elsewhere and allow the cups to support instead of squash. This bra is no exception, and it is in fact a pretty significant culprit in the cups-at-the-wrong-angle-for-my-chest department: too much projection, too short and too quick to close on the top of the cup. However, since I am pretty sure that almost any strapless bra is going to be like this on me, I guess it's not any worse than any other.

I have noticed the bottom of the cups wrinkling a lot, and I am a little concerned that maybe a 30FF in Panache is a cup size too big for me, but I think sizing down would also make the pseudo-quad-boob thing worse; plus, I have the orange-in-a-glass effect in lots of bras, so this is just be a combination of not being FOB enough plus the cup volume being at the wrong angle to contain more of my breast tissue. The wires are also not quite wide enough to contain all of my super wide roots on the sides.

The center gore of most strapless bras are too high for me due to super-close-set boobs, but this one is actually pretty low! It's the reason I considered it in the first place, and I was not disappointed! Hooray! Thanks for the plunge, Panache!

Also, it will slide down a bit, even hooked as tight as you can go, but all strapless bras slide a little, so again, no surprise here. I am sensitive to clothes things (scratchy tags, socks bunching around ankles, etc), so it bugs me, but like I said, it comes with the territory.

Bottom of the cup:
Can't quite fill it