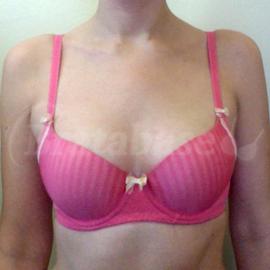 This bra is the same cut as the Freya Deco Moulded Half Cup Bra (4232) and likewise runs large in the cups and band. I sized down in the cup, but stayed with my normal band size. The looseness in the band isn't too much of an issue for me, but the uneven tension between the top and bottom of the band is far more bothersome. The bottom of the band is nice and snug, but the top of the band is loose, and even has slack just behind the cups.
This bra works for shallow breasts, though I find the wires are not long enough and the cups offer *just enough* coverage.
Appearance-wise this bra is definitely a "prettified" version of the Deco Moulded half cup. The fabric is a sugary pink with damask stripes. The sides of the cups and top of the band are edged in a cream lace, finished with bows at the straps and center gore.

Strap separation:
Not a problem
Underwire length:
Is too short on the side, boobs escape