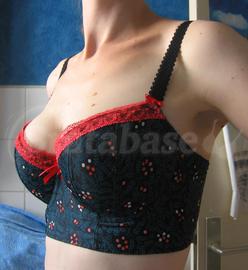 My overall impression about this bra is very good. The fit is ok since it's a very nice construction, my breast generally gets on easily with half-cups and vertical cuts.

The shape – is very rounded in profile, Ivy gives the impression that my breast are bigger than they are in reality.

The underwires – when I wear this bra, I feel like they were too wide. This impression is not confirmed by the measurements, the cup width is “standard” for this size and the underwires aren't particularly flexible. I guess that it's related to the straps' position and the distance between the strap and the underwire. In other words, the straps are too centred for me, I prefer the strap position like in EM bras.

The straps – very wide and comfortable like in all Freya bras, I find them very long too.

The band – I bought Ivy in 30E because it was the last size likely to fit me, usually I wear 28 bands in Freya. I also thought that such a large band would be too constrictive in 28F. I was very surprised when I first tried Ivy on. The band is not only long but also very stretchy, definitely too loose for me. I have to fasten it on the tightest hooks and it's still not stable enough. If I ever try an another Freya longline bra, it'll be in 28F. I'm also very disappointed by the fact that their other bras based on the same or similar cut start at 30 band. I'd love to try some other half-cups from this brand, but I would be obliged to alter the band.
The band is comfortable but it tends to ride up and the hooks are visible under the clothes.