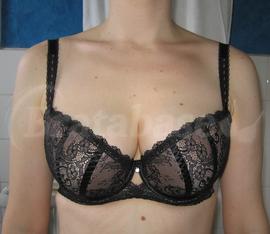 It’s the first time I ordered an EM half cup in 70E. I always thought the half cups have looser bands than plunges or S styles (it’s also what Ewa says on her web site). In my case all the half cups run a little bit tighter than any other style. My last half cups, Red Wine and Office, are actually so tight I could never wear them without extender (I can fasten it but it’s anything but comfortable).
I’m pretty glad I went up a band size. Even though the band measurements are comparable to the Jagody, it feels firmer. I think it might be because of the underwires, they’re probably harder.
The cup isn’t definitely a perfect match for my shape. I didn’t notice this problem with my other CHPs probably because of the tighter band, but now I can see this style is designed for FOT breasts and I’m rather FOB. The cups are very projected and rather open on top. I think it’ll be great during my PMS. Under the clothes, the shape is really projected and rounded compared to the S style or any unpadded EM bra.
I don’t like the straps in this bra, like any other black straps in EM bras by the way. They’re the same width as the Jagody, but they’re stretchier and I don’t feel well supported especially in this style because my breasts are more projected are more weight is put on the straps. I think I’ll never order any bra with black straps from Ewa again.
On the positive side, I really like the lace covering the cups, much more than the one in Oxana. The overall quality, excepting the straps, is really nice.