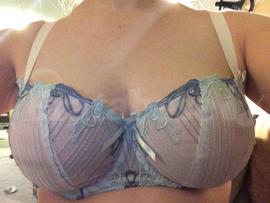 This bra's measurements have been altered
Altered straps, Straps moved in 2 cm and centre gore raised.

I still get the bulge over the wire at the outside edges of the cups and the flattenning on the top outside edge of the cup where the strap would have been originally. But, the raised centre gore makes the inner top edges of the cup sit well and reduces the flattened look. I'm going to look into what I can do to modify the shape, but the fit works well.

Chloe is very softly lined with a soft synthetic outer cup with two toned blue embroidery. It has a fairly substantial embroidered top edge. The band is pretty standard and the cup volume matches the Donna and Beauty (bigger than Angel and I found Ginger a little small too).

The wings might be a bit short for me, but we'll see.

Edit: I solved it! I put a dart in the elastic right inside the outside end of the wire. This pulls the top edges of the cup a touch wider, but doesn't change the strap set width very much.