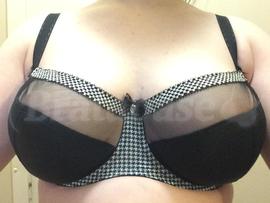 This bra's measurements have been altered
0.5 cm Dart in top edge of cup just inside straps

An unfortunate almost! cups a bit too wide, straps set too far apart, just, and not quite enough immediate projection. I also get some in cup quading. I think it is because the straps are almost too short - I have them extended all the way and the immediate projection wrinkles bring the appex lower on my breast than it needs to be. I would size up a cup, but the upper part of the cup is as loose as it could be.

For Gaia, I band size up like Comexims - they are pretty size equivalent

This is a really beautiful black and white bra! The front of the frame is a houndtooth pattern and with the checked and textured edge ribbon, it is really classy. I was expecting some problems with the ribbons at the top of the cup, but none at all! The mesh and ribbon top of the cup is not elastic but is fairly generous - accommodates my centre fullness and average to tall roots with a little room to spare. Really FoT probably can't manage though. For some reason, the wires feel narrower than they measure - I think it is because of the shape - it angles out half way up the wing.

It is a really really nice shape. Very round and very front and centre. Not quite Cleo Marcie, but really close.

I think I will sit on it for a bit and see if I can't alter it.

Edit:
Alteration: I put a half cm dart in the top edge of the cup just inside the strap attachment. Has brought straps a touch narrower, has caused no quading, resolved in cup quading. A little wrinkling in top cup mesh at dart, but not enough to bother stiching. Still not quite a perfect fit, but pretty darn close. And it's just so beautiful!!!

Side note: dart is almost invisible becayse of checked pattern on ribbon and while I was aware of it when I first put it on, I quickly stopped feeling it at all, even when moving around. Once the bra was on long enough to really settle into place, I could only feel it at all because I used waxed quilting thread, which is easy to work with and sufficiently strong, but ... waxed, stiff. The thread will relax with a little wear and I don't expect to be able to feel it at all. I'm really liking this strategy, this is my second attempt and having the extra room on top gives me just the room I need to pull the straps inward a touch.