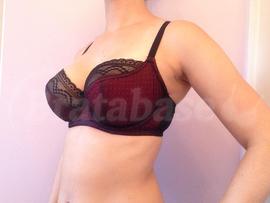 I've only worn this bra two or three times since I got it, so these opinions could change in the future. But so far, I really like this bra! I bought it at Secrets From Your Sister in Toronto, Ontario for about $65 plus tax. A little more expensive than other Cleos I've bought there in the past, but still cheaper than Panache and Freya and most other brands. I really love the colour combination of this bra. It's hot pink with black mesh overtop which creates a really pretty cranberry colour from the outside. The band is a really soft and smooth microfiber and it's quite snug, like a lot of other unpadded Cleos (except for the recent Marcie in Bluebell and Blake bras; damn you for being so beautiful yet so stretchy!!). The cups have stretch lace on the top half in a really cool geometric kind of pattern, and the cups themselves create a super projected and round shape. In fact, I don't like wearing this bra with some of my looser tops because I don't like the silhouette it creates. However I do still wear it frequently when I am going for the projected silhouette. The gore tacks on me (I've never had a problem with this because my breasts have a fair amount of space in between them on my sternum), the lace lays flat (although I did have to go down a cup from my usual size because of the stretch lace and the fact that this bra is just SO projected), and it has decent immediate projection at the wire. The only thing that I was not happy about was that when I bought it, there were a bunch of additional loose threads that were sewn into the right cup. Like, there were little 1cm threads that I was picking out of the stitching because they were sticking out. So the quality was not quite up to par with what I've come to expect from Cleo, but I think that the issue with this particular bra was just a fluke. Overall, really happy with this bra!

Updated review, Oct. 5th/2017: Okay, so my opinions have definitely changed regarding this bra, and not for the better. This bra continues to reveal its poor quality. As I've washed and worn this bra, the stretch lace has been changing in shape and texture. It seems rougher, and it has become more loose and does not conform to my shape as well when I move around. The black mesh overlay on the cups has become slightly stretched and it wrinkles independently of the inside structure of the cups. The gore becomes painful after a day of wearing, which rarely happens to me. I'm not sure if it's because this bra has become a shape mismatch for me, or whether the cups have lost some of its shape over time, or any number of other reasons. Regardless, this bra has not lived up to its expectations. Hopefully this one bra, or this one model, is just a fluke and the rest of Cleo's bras continue to be produced at top quality.