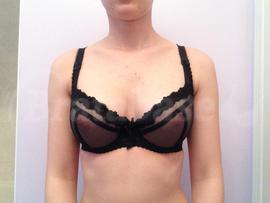 So I got this bra from Petite Collegiate a couple months back, and I have to say I don't wear it as often as I thought I would. There are two main reasons for this: one, the band is quite snug (it is a 55/26, after all, and I don't always feel like wearing a super firm band), and two, there's a bit of in-cup quadding that happens. I think this is because the horizontal seam has sewn the mesh to be tighter than its usual tension on the rest of the cup. Other than these two factors, I really do like it. I always wear it on the loosest set of hooks, the wires are a great width for me, the gore tacks, it gives me great cleavage, it has a good aesthetic, etc. On a scale of 1-10 for immediate projection at the wire, this bra is probably between a 4-6. It's definitely not the worst, but it's not the best (not that I need tons of immediate projection anyway). The straps are set on the wide side, I'd say, but that doesn't usually bother me. The cup-strap connection is wide and could definitely be a problem for others in terms of rubbing the armpits, but that's just another thing I've gotten used to TBH. It's not a deal-breaker for me, and if I were to order from Comexim (and not just buy them secondhand), I probably wouldn't go out of my way to request moved in straps.

Top of the cup:
Cuts into breast tissue (quad boob effect)
Band fit:
I can fasten it, but it feels too tight