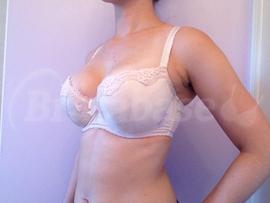 I loooove this bra! I'd been lusting over it for months and I finally ordered it through Jaimie at Bra Obsessed back in February (I'm lucky enough to live in the same city as her)! Obviously the 60 band was custom, but she didn't charge me any extra (we're both morally opposed to Ewa charging extra for small bands). Unfortunately I can wear this on the third and fourth hooks already (the two tightest columns) so I'll be ordering all my Comexims and EM's in 55 bands from now on. I think EM is trying to make their bands more true-to-size lately, but this is just a rumour I've heard. No sources unfortunately. But anyway, the band still fits great even on the tightest hooks, and the material is super soft and breathable. The wire width is perfect, the cup depth, apex projection, and immediate projection are perfect, and I think this might be my HG cut! The gore tacks nice and firm, and is super narrow. The styling itself is beautiful, and I couldn't be happier! It's light enough that it functions as a nude for me (in fact it's slightly lighter than my skin tone) but it's great for wearing under lighter and slightly sheer tops. The only qualm I have (besides the band length) is that once in a blue moon, the right underwire digs into my ribs by the end of the day. I'll have to take some notes on when it happens, but I have a suspicion that it might be when I'm on my period and I'm feeling slightly more bloated/swollen/sensitive than usual. So it's probably not even the fault of the bra, it's probably just my own sensitivities.

On May 2018 View measurements