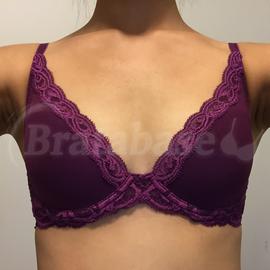 Ah, the Natori Feathers. Wide and shallow, they said, and wide and shallow it was. This bra is soooo wide. There's like, a full inch between the wire and my IMF. I don't particularly mind wide wires actually, and these are quite comfy and feel secure, but the cups being all the way out there makes boob-in-cup placement a tad difficult. This problem is only exacerbated by the fact that horizontal apexes of the cups are really far apart (even though the gore isn't particularly wide). The bra's shallowness in terms of immediate projection and at the apex aren't problematic, but what is a problem is how much it cuts in in the center - I don't consider myself to have a lot of center fullness, just close together boobs, and the Feathers does nothing to contain them. My breasts are firm enough that spilling isn't an issue, but, the quadding bothers me, even though you can't see it in pictures.(Edit: the underwires float near the gore, which I suppose is due to the shallowness. auuhgh.)

I do appreciate that the sides of the cups (not the wings) come up really high because I don't mind my armpit running into the bra once in a while in return for the bra not sliding back and forth over my ToS & neighboring tissue.

Well, aesthetics. I'm really fan of this look, so it's a shame it doesn't fit me that well. The feathery part is absolutely gorgeous, and I love the way it runs along the band. That being said, the band feels really delicate when I put it on, so I might appreciate a bit more heft in that department. The hardware is gold (colored), very pretty.

Top of the cup:
Cuts into breast tissue (quad boob effect)
Cups separation:
Too separate for my boobs
Band fit:
The band is definitely too big
Cup's width:
There is empty fabric on the sides (Cup too wide)