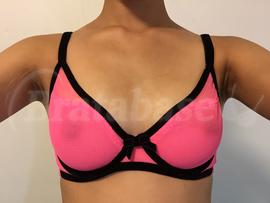 This bra fits like a charm. The wires are just right, if not a touch wide, and the fishnet is actually two layers - one stretch fishnet layer, and one semistretch mesh layer, which gives for some nice support and elasticity. The cups are pretty shallow. I'd guess that this bra is probably going to work mostly for self-supporting boobs like mine, since there wasn't much in the way of support - it was more like a very cute encapsulating sports bra.

And cute it is! The velvet straps are a nice touch, they are kind of hard but there was nothing uncomfortable about them. The color pops against the black piping.

There was the occasional wrinkle in the upper section of the cup but other than that practically invisible under most shirts. The band seemed fine on the loosest hook (maybe because of the grippiness of the velvet). Overall it is very dang comfy.