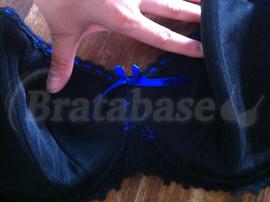 Hmm, I don’t really know what to think of this bra yet.

In principle, the CHP suits me wonderfully, and the cup in a 70GG or 65H (depending on the CHP model) has thus far been a perfect fit. The CHP Noc (or at least this particular bra), however, isn’t as open on the top as my previous CHP Cappuccinos, CHP Mak or (C)HP Koktajl. The top seam, with the blue decorative ribbon, doesn’t stretch at all, and on top of that, it’s tighter than the rest of the cup. This means that the top of the cup curves inwards and gives a pointier rather than rounded shape, very un-CHP-like.

As a result, I get quite a fair amount of quadboob even though the rest of the cup fits just fine. Though I must admit that my boobs are ridiculously PMS swollen and more or less all my bras feel small, so I can’t really tell for sure yet. I’ll wait with evaluating the fit and taking photos until the girls have calmed down https://d28qt14g3opchh.cloudfront.net/smileys/icon_mrgreen.gif" alt=":D" /> Also, I don’t know yet whether the top of the cup will stretch along wear.

The band is snug-ish for its size, but not as enormously tight as in the CHP Mak or HM Gold. I can fasten it comfortably on the second row of hooks as new, but then again there are only three rows so there isn’t much room to stretch before it gets too big. So I probably could have worn this as a 65, but then I’d maybe have needed an extender to start with.

The straps are almost fully adjustable, but quite short. For me it’s definitely no problem, as I usually have to shorten the straps on almost every bra, but if you tend to need long straps, it could be a problem. They don’t seem too stretchy, which is good considering the support.

The looks of the bra is very pretty, I really like the small details (tiny blue flowers, lace, ribbon). Ewa sure handles those https://d28qt14g3opchh.cloudfront.net/smileys/icon_smile.gif" alt=":)" /> The band’s lace on the front does curl immediately, though https://d28qt14g3opchh.cloudfront.net/smileys/icon_sad.gif" alt=":(" />

So all in all, I don’t know where we are yet. I’ll have to give an update a bit later.

// Update: I notice I've left this bra in the closet and worn it 0 times due to the quadboob problem, so I'll list this.